If it had wheels, it went flying

Legendary motocross and freestyle dirt bike rider Travis Pastrana brought Nitro Circus—the daredevil stunt variety show—to the SAP Center in San Jose on Thursday night. In tow were some of the most daring and talented extreme sports athletes in the world, performing a wide range of gravity-defying maneuvers for an amped-up Bay Area audience.

You may recognize Pastrana as the stunt performer who replicated three of Evel Knievel’s most famous jumps, earlier this year in Las Vegas. Nitro Circus keeps with that same sense of high-risk vertical challenge. The show involves a host of sizable ramps and landing pads that give the athletes room to progress their stunts from night to night. So while the circus showcases some stunning choreography, many of the stunts are active challenges that have evolved over the course of time. In fact, this particular tour of Nitro Circus has already seen its collection of “firsts” and Thursday night was no different (see below).

In case you missed the action, we sketched out the highflying highlights in vivid visual form. Take a look….

It’s been 17 years since back-flips were first being done on dirt bikes, but the one performed by Bruce Cook at SAP was very different. In 2014, Bruce crashed while attempting the world’s first double front-flip on a dirt bike, leaving him paralyzed from the waist down. Nine months later, he was back on a dirt bike, and only one month after that he was attempting back-flips again. At Nitro Circus, Bruce rides a custom-built dirt bike that keeps him strapped in while he performs his stunts.

If you can put wheels on it, chances are it was flying through the sky at SAP. There was a flying trash can, boogie board, skis, a children’s toy car and even a VW Bus replica. Seeing these objects piloted thirty feet into the air was not something many people expected to see, but was met with big cheers.

Front-flips are a rare trick on a dirt bike that very few dare to attempt (let alone master) but Greg Duffy is one of those rare athletes. On Thursday night, Greg pulled a front-flip nac-nac, one of only two variations attempted at Nitro Circus.

Ryan Williams has performed a number of “World’s first” and his bike-flip is no exception. Ryan first performed this uncanny mid-air bike twirl last year and has since made it one of his signature tricks (and a standout highlight of Nitro Circus). His stunt came in second place for Best Trick of the event and Ryan even tried to add a combination of bike-flip to tail-whip on his second run, but was unsuccessful.

The Nitro Circus: You Got This tour has two stops left on its North American journey before ending in Denver, Colorado, on October 16th. The Nitro Circus tours extensively through much of the world and has just announced a permanent residency at Bally’s Las Vegas starting in 2019.

Punk rock Peninsula: photos from the final run of the Vans Warped Tour 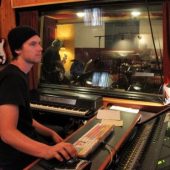