Fifteen miles from the hustle and bustle of Downtown San Jose lies a window to the rest of the galaxy and beyond.

This coming Tuesday, the Foothill College Observatory will be hosting a special panel to celebrate the 50th anniversary of the Apollo 11 mission. The panel, comprised of four NASA Ames scientists, will examine the legacy of the Apollo program, as well as look forward towards NASA’s upcoming Artemis program. NASA scientists Greg Schmidt, Tony Colaprete, Lynn Harper and Brian Day will also delve into Ames’ specific role in the upcoming missions.

Ahead of this special event, we caught up with one of Foothill College’s astronomy professors, Geoff Matthews, to discuss the Observatory, the panel and other upcoming events.

How old is the Observatory and what are its main services?

I don’t remember the exact date the Observatory was built, but it’s more than 40 years old. In terms of the services, every Friday night from 9–11 p.m. the Observatory is free and open to the public. On Saturday mornings, it is open for solar observing from 10–12 noon, in coordination with a fantastic group of volunteers, the Peninsula Astronomical Society.

What are some common misconceptions about the work done at the Observatory?

One misconception that I’ve heard a lot from people who come to the Observatory is that we can just look at anything we want. We are, of course, constrained by both the time of year and time of night. Visitors sometimes imagine it as more of a planetarium, where you come in and see this big projector that shows you whatever you want.

Can you tell us a bit about the upcoming NASA panel about the 50th anniversary of the moon landing?

The panel discussion will be at 7 p.m. at Appreciation Hall on the Foothill College Campus. We’re going to have four scientists from NASA Ames who will discuss the legacy of the projects of the Apollo program. We’ll also be discussing [NASA’s] next steps. NASA has announced its Artemis program to return to the moon as part of the pathway to Mars. They will discuss the work they’re anticipating over the course of the next decade to put people back on the moon in a more permanent fashion.

The way I would recommend [participating] is to drop by one of the viewing sessions and speak to one of the volunteers who is there. Also, the Foothill Astronomy website has links and information for joining the Peninsula Astronomical Society. They should also come to the Peninsula Astronomical Society’s monthly talks; during the summer they are held in the Los Altos Public Library, but during the school year they are held on campus.

Is there anything readers should keep an eye out for?

Keep an eye on the Foothill College Astronomy website, because we post about upcoming events there. There will be a Mercury transit on November 11… I saw the Mercury transit back in 2006 and it was really amazing… so keep an eye out for that event. 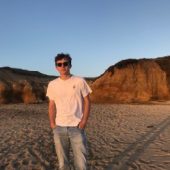