Luca Padua was recently sitting in English class at Half Moon Bay High School when he received a text from a friend congratulating him on being slated as an official alternate in the 2017–2018 Mavericks big wave surf contest. The news immediately stirred Padua up. At the age of just 16, he was now one of the youngest surfers to ever make the roster for the famed competition.

The Mavericks surf break, just north of Half Moon Bay, is a world famous big wave that has been ridden by some of the greatest surfers. But that in itself is still just a very small handful of people. For most, the wave is for spectating — via photographs and videos, or simply through binoculars from the nearby Pillar Point cliffs.

Up close, the wave is a stunning spectacle. It is Mother Nature unleashing a fierce and potentially deadly giant wall of water. If the average ceiling height measures about eight feet high, then the wave stands three times that size on the smallest of days. Yet it is not just the height that is threatening, but the density of the wave. Mavericks is a rarity when it breaks big, and for those who get close enough to feel the full force of the wave, it is truly a singular experience.

Padua is quick to attest to this. At 16, he is now in his third season surfing the break since making his first drop — amazingly — at just 13 years old. For Padua, Mavericks is more than a contest, it is a yearning to be with the wave as much as possible. Living less than a mile away in El Granada, Padua has embraced the opportunity of his proximity.

With the contest start-date looming on the near horizon, we spoke with Padua about Mavericks, and why surfing it is just plain “crazy.”

Receiving that initial text in English class informing you that you made the contest, what were your first thoughts?

People were trying to read so I had to keep it cool. I wasn’t jumping up and down in the air. Inside I was pretty stoked. It’s awesome to be on the list and I’m honored to represent Half Moon Bay, but if I don’t get in I’ll still be doing the same thing. I’ll be out there surfing.

We can’t all go out to Mavericks, can you bring it to us? Can you describe what it is like to be out there?

I always tell people you can see video and pictures, you can hear stories, but no matter what you hear or see you would never understand. Once you are out there you can feel the raw power and energy and everything that is going on. It’s like nothing else. When you see someone take the worst wipeout of their life, it doesn’t look real. On those days when it is pumping and crazy huge and everyone is flying in from all over the world … that stuff is more hectic than the actual surfing part. I feel once you get in the water it’s almost soothing and calm, even though it’s a crazy fifty-foot wave.

What is it like to make the drop and ride the wave?

You are not thinking about anything else except exactly what is going on. It’s like that but magnified by ten thousand. You are so focused on sticking that drop and not falling and once you stick the drop deciding what you are going to do after. Dropping in you have to be 100% focused and committed, and if 1% of you isn’t, you are not going to make that wave. It’s crazy. The adrenaline is pumping so hard that you almost feel like a super human. When you are going that fast and the wave is that steep, and you look back at the wave you just rode or is coming down on you — whether you stick a crazy drop, survive a wipeout — it’s a feeling of euphoria going throughout your body.

You keep using the word “crazy.” What does crazy mean to you?

That you could die at any second. It’s understanding the actual power of the ocean. When you look back, or look at a video clip, who knows what could have happened. That’s what crazy is. Watching your friend dropping in on a wave, knowing that something really bad could have happened, or that they just had the best wave of their life.

Is it intimidating laying on your stomach starting up a mountain of water?

Mavericks is almost comforting. It’s weird. At first it was definitely intimidating. My first time out there, when I was 13, I was in the channel and if a lump of water came my way I was scratching for my life. I didn’t know any better. Now, it fires me up. When I see huge waves I think, it’s on! But watching some of my friends get blown up by 20, 30 foot waves, that puts a pit in my stomach. That part can be intimidating.

Is there anything you can compare it to?

On a scale of 1–10, how frightening is surfing Mavericks?

Mavericks breaks to the left and to the right, the left considered to be more challenging. Can you compare the two?

The way the left jacks up off the reef is completely different. The wave on the left moves way faster and there is way less time for you to paddle in, stand up and ride the wave successfully. That’s what is more of a challenge. It’s crazy how 10 to 20 feet from where you are taking off will make a difference on the wipeout, too. If you wipeout on the left it is heavier, even though you are only 20 feet away from the right. The left is more critical, even the small ones. It takes more commitment to ride. You have to sit in a different spot, which could be a bad spot if a big cleanup set comes in. You could wear those waves on the head. You have to know that if you want to surf the left well you are going to take some poundings.

It’s my best friend. My life is devoted to Mavericks and surfing big waves. It has been a big help for me to see how the different generations surf. I can see their different perspectives and take advice from all of them. I can take everything that everyone has taught me plus what I like to do and put it all into one.

You are under a microscope it seems, with all your moves documented how do you stay with the experience?

The experience comes naturally. Now, it seems like if you didn’t get the picture or if it’s not on Instagram, it never happened. For me I have it right here in my head. There are still days when no one documents. The wave still happened and I got to experience it. There is the side of having video where I can change my surfing. I have changed so much in the last three years mostly based off video and what people have seen and told me. Without it I would not be where I am. There are pros and cons to it.

We can’t predict the future, but where do you see yourself with Mavericks in the future?

This year I’m on the alternate list for Mavericks, but I hope to get on the list in the main event. Every year I want to get the biggest wave of my life.

What is it that you are going after as you further your journey surfing big waves? 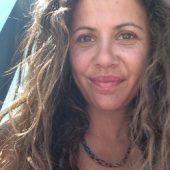 Hey, hello, Sonia here. What's up?! I'm a quarter educator, quarter environmentalist, quarter writer and reader, and in between all those cracks of weathering, you'll find love. On the pro side, in 2019 I completed the Science and Environment Teacher Fellowship and was recognized as a standout leader in environmental and sustainable education through the One Planet Schools Challenge. I am a National Geographic certified educator and a 2021 Grosvenor Teacher Fellow through National Geographic and Lindblad Expeditions. I also write fiction novels for middle readers to promote environmental literacy and sustainability through storytelling.

A growing tradition: At Christmastime, Peninsulans flock to the Santa Cruz Mountains to cut down their own trees