What happens when you go to Redwood City’s scariest Halloween houses to give THEM candy? You make some very interesting new friends…

Traipsing down the dark cul-de-sac, I hear a frictious screech that resembles a haunted version of my favorite childhood playground structure.

Sure enough, drawing near, I see a nightmarish seesaw with demented, bloody riders on either end. I take another step — and a ghost whooshes in front of my face, darting from a young redwood to a perch on the garage. To my left, rats feast on a dismembered human leg, the torn denim still clinging to rotting flesh.

Climbing the steps, past evil laughter and high-pitched cackles, I ring the doorbell. Then the door opens —

The family’s reaction is about what I’d expected: confusion and blank stares. So I explain.

“Most people don’t decorate for Halloween — but you did! And it makes every dog walk and every drive to work more fun for me! You’ve made my everyday routine imaginative and fun, so I thought I’d bring you a treat!”

With that, I hand them a small box of See’s Candy, which I picked up at the Sequoia Station location, just down the hill.

I’ll admit, Reverse Trick-or-Treating is a brand-new tradition for me. And, yes, it was “… different.” Before I knocked on my first door, I felt so awkward. I don’t really know any of my neighbors (which was part of the point — I want to know my neighbors), yet here I was, the Saturday before Halloween, about to go knock on their doors and give them candy.

But one great thing about having a blog is that you can hold yourself accountable. “Practice what you preach,” right? If you can’t push your own comfort zone a little, you have no business telling others to do so.

So together with my boyfriend and my “Chief Executive Intern” Michelle Liang, we piled out of the car, walked under a giant inflatable spider, and knocked on our first door…

And no one was home.

We were a little relieved to put the first box of candy on the doorstep with a nice note and skedaddle, a black cat with glowing orange eyes watching us each step of the way.

With that out of our system, we felt much more confident at the second house, just a few blocks away. The driveway was lined with florid ghosts; a web spanned the entire front yard, with a giant spider lying in wait.

We rang the bell, and a mom with her three children answered. “Reverse Trick-or-Treat!”

I explained why we were there and offered a box of chocolate cremes. Then I asked, “Most people don’t decorate for Halloween. Why did you?”

The mom laughed. “Actually, my sons wanted to do it.”

They each told me what they were going to be for Halloween (TV characters I hadn’t heard of) and thanked us for the candy. As we were walking away, I heard the mom explaining to her boys, again, why we’d brought them a treat.

Next up, the rotting-flesh haunted seesaw house.

One thing that amazed me about this family is that, despite being incredibly busy (“He’s a doctor and I’m a lawyer — I know, right? What a cliche!”), these two adults have been putting together an elaborate haunted yard for over 15 years. Joining them now in this playful endeavor are their preteen son and teenage daughter.

“Where’d you get the animatronics?” I ask.

“You should come back in a few days,” the mom urged. “We’re not even done yet!”

“And here, take some candy!”

“But we’re reverse trick-or-treating!” I protested. “We’re supposed to be giving you candy.”

The next house, conveniently, was right across the street. Two 12-foot inflatable pumpkin-headed skeletors loomed over a front lawn graveyard. The whole property was littered with bones. Orange lights blinked spastically as we walked up the skull-lined driveway.

This time, a father and two sons answered. When I asked what inspired their decorations, the father indicated his older son. “This is the mastermind.”

As if on cue, he stepped onto the porch and started explaining some of the electronics he’d built and the artistic decisions he’d made.

“Our neighbor across the street has been a great mentor to him,” the father explained.

“Yeah,” the son chimed back in, “we just finished the flying ghost this afternoon!” Sure enough, when I looked behind me a ghost was on the move.

He, too, told me to come back in a few days. “That skeleton will have a head, and I’m programming it to say some things.”

“Scary stuff. You’ll have to come back to find out.”

I asked if I could take a photo of my dog with his animatronic puppy skeleton. Wordlessly, he pushed a small button under the chin. The eyes glowed red and the head began rolling around on its spine.

With 90 percent of the initial hesitation and awkwardness gone, we continued on our journey.

Finally, we reached our last house of the night — and the one that originally inspired the idea for #ReverseTrickOrTreating.

Situated on Alameda de las Pulgas, this house features a costumed velociraptor, a skeleton kitty, and a skeleton chilling at the picnic table, all complemented by spooky purple lighting.

When we knocked on the door, we quickly learned that the velociraptor has a name: it’s Tango. And she’s on Facebook!

When I asked what inspired their decorations, I found my secret mind-twins in Tim and Janet Lawson.

“Well, we decided to remove our front lawn a few years ago, for conservation.”

(I’m so on-board with conservation, and love that this family took steps to be responsible.)

“We really wanted to make the yard a place for community. We live on a busy road, not just car traffic, but lots of joggers, walkers, bikers, and students.”

(Which was part of the reason why I wanted to do Reverse Trick-or-Treating!)

“We love the joy and sense of community that Tango has brought to our neighborhood. We constantly have preschoolers who insist that their parents must stop and greet Tango (sorry, parents). When our kids want to ride their bikes out front, I hang out at the picnic table. Tango is a natural conversation piece, and we’ve met many lovely people because of her.”

(I once wrote a blog post called Why You Should STOP Playing in the Backyard — And Where You Should Play Instead. It’s all about the magic of moving the party to the front, where passersby have the chance to join in the fun.)

“I asked Tim to build a picnic table for our front yard after hearing about the Turquoise Table Project. I didn’t need it to be turquoise, but I did need a dinosaur. Because, who doesn’t?”

Tim added, “Our friends up the road have a T-rex. And we thought it would be really cool if Redwood City were just full of dinosaurs.”

(Love it! I knew exactly what house they were talking about, and I love the crazy costumes and outfits the dino-king dons every holiday and every time the Giants, Warriors, or Sharks make the playoffs. And it turns out, his name is Dug, and he has a Facebook page, too!)

The velociraptor came from Sun Studios in Half Moon Bay (off Highway 92), so they even shopped local. Tango’s past Halloween costumes include a Minion and a skeleton, but my personal favorite was her Shark Week costume this past July:

With that, we took a group photo and called it a night.

But I’ve still got some candy left. So if you’re one of the people who went all out for Halloween… you just might get a reverse trick-or-treater this week.

And if you’re not one of those people — maybe you can try #ReverseTrickOrTreating!

Eva Glasrud lives in Redwood City. She runs Paved With Verbs, an education consulting company that provides college counseling and life coaching services for gifted teenagers. She blogs at The Happy Talent.

Fear And Yodeling at the Mountain View Oktoberfest 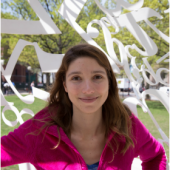